The challenges of injection process

The precision of the injection and along with it the quality of the product mainly depend on the following factors: the brine composition and conveyance process and the composition of the piece of meat/fish. This problem is a challenging task for the manufacturers of injectors.

The market for cured meat is subject to significant changes. While injection rates of 25% and more are still common practice, low injection rates in the range of 10% and less, are increasingly being discussed and demanded. The required salt concentration for the technical curing process is not considered, which means that there is a special challenge in the brine mixing and conveyance process during brine production and its saturation with salt. In the field of raw cured meat and fish products, such as cured bacon or salmon, efforts are increasingly focused on introducing as much salt as possible already during the injection process thus producing highly saturated brines.

Specially adapted modules of the BRIMAX series from Schröder in Werther are designed for this task. Special pumps ensure already during the mixing stage that the brines are optimally homogenised; special fast spinning impeller wheels integrated in the pumps reduce the undissolved salt crystals to small pieces by means of a high number of revolutions and thereby enable them to remain suspended for a sufficient period of time. 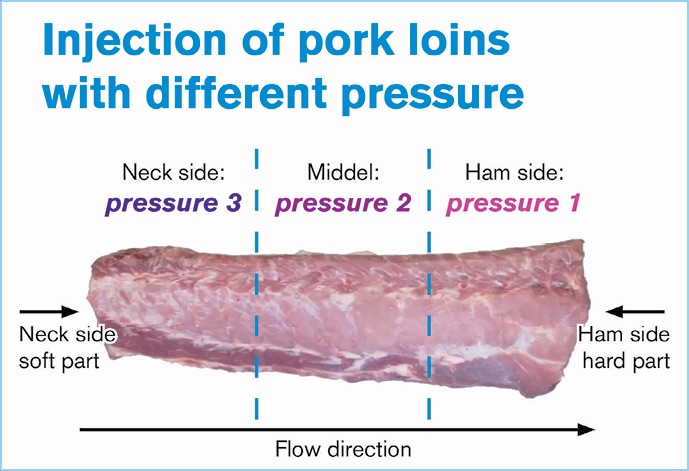 Depending on the technical requirements for precise injection and special brine production, the technical conditions for certain pieces of meat represent major challenges for producers. These problems are well-known in the case of products such as bacon, which usually has a greatly differing structure. The brine absorption capacity of the belly differs significantly from other parts. If one of the brines described above with a salt concentration of far more than 30% is used with an injection rate of 10%, a deviation of just 1% in any section of the muscle can have crucial consequences for the quality of the final product. This challenge also concerns the curing process of pork loin. The tissue of this type of muscle differs significantly on both ends.

On the ham side, the meat is solid which makes it dense, while on the neck side, the meat becomes softer and has a looser structure. A usual injector applies a pump pressure setting which is as constant as possible, ensuring an even flow rate of brine. However, the meat is not able to absorb this brine volume evenly. The ham side inevitably receives less brine, whereas only an area in the middle receives the accurate quantity. The brine and therefore the salt content on the neck side on the other hand will be too high. Although the average injection rate seems to be accurate during checks, the treated product will have completely different characteristics within the individual meat zones.

The good news is that these characteristics are very evenly distributed in the muscle. The size, i.e. the length of the muscle and the way it varies in structure from one end to the other are largely identical. The patented ACI technology from Schröder Maschinenbau uses this fact. ACI (Area Control Injection) makes it possible to adjust the pressure of the injector pump continuously from one cycle to another. Considering the pork loin is divided in the above mentioned three different zones.
These zones are considered when programming the settings of the injector. One will store the number of cycles that the injector requires to convey the pork loin through each individual meat-zone. The operator assigns varying pump pressures to the individual zones. When the pork loin is conveyed through the machine, the injector automatically changes the pump pressure as soon as the next zone is reached. This method ensures that each individual zone of the problematic muscle receives exactly that quantity of brine, which can or must be absorbed by the treated muscle section. The injector defines the location of the correct zone automatically.

The pork loins are placed on the conveyor of the machine alongside to the direction of flow. When loading the machine, the operator leaves a distance of just a few centimetrs between the individual “packages“. The injector uses mechanical or electronic detection systems and requires this distance to locate the pieces of meat while they are running through the machine. In this way, the program can determine the beginning of the next piece/portion of pork loin and the position of the respective injection zones. The remaining sequence is fully automatic and according to the programmed settings. If ACI technology is applied, a separate pump is assigned to each injection head. There are two pump modules integrated in the controller i.e. a separate pump pressure can be used for each injection head and the respective zones are identified. The brine is conveyed automatically and separately for each injection head, which means that the Schröder principle of zone injection works reliably – even when large capacities are processed.