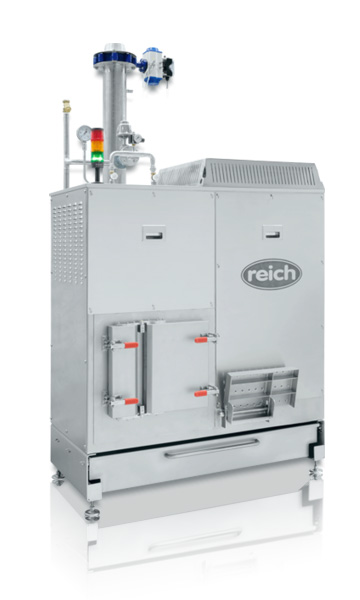 Joint developments together with an industry customer always make special but also high demands of all involved. On the one hand, the product can be quickly developed further and optimised due to the continuous return flow of information. On the other, weaknesses in the prototype have to be rectified faster and directly on site.

Precisely this kind of joint project emerged last year at the IFFA: The new steam concept, then still known as S 1000 H, was presented there. A well-known company from German industry was quickly found which entered into a development partnership with REICH. A test device had already been installed by late summer. The subsequent test phase was supervised intensively by REICH technicians and engineers.

All knowledge gained from this immediately flowed back into the ongoing development. The result of these efforts is the new SteamSmoker S 800 H and SteamSmoker S 900 H steam generator generation. The big weakness of the steam generators available on the market has always been the intensive maintenance and care needed. This is precisely where REICH’s new concept picks up.

Due to a newly developed self-cleaning smouldering sieve it was possible to lower the replacement intervals from several times a day to a few a week. Ash is transported out fully automatically during operation. Just the spacious and easily accessible ash drawer needs to be emptied. The supply hopper for wood chips has been made very large in order to make refilling intervals as long as possible.

A fully automatic cleaning system which completely cleans both the reaction and the ash
space rounds off the package.
In order to guarantee a high level of operating safety, the new steam generator was fitted with its own integrated extinguishing system which extinguishes fully automatically in case the smoke generator catches fire. This means that serious damage can be permanently avoided.

The steam generator generation is available in two versions: the SteamSmoker S 800 H plus, which corresponds to the previous REICH S 800 H device, and the SteamSmoker S 900 H with double overheater for twice the volume of smoke. Meanwhile, several S 900 H are reliably in service in German industrial companies.

Numerous other smaller detailed solutions turn REICH steam generators into devices with which it is a pleasure to work every day.